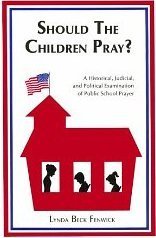 Should the Children Pray? A Historical, Judicial, and Political Examination of Public School Prayer

Fenwick opens her book with these words: "The American perception of their ancestors as proponents of religious freedom recognizes only part of the picture. While it is true that many colonists sought the freedom to worship as they pleased, the years have obscured the unattractive fact that these same colonists generally reserved that right for themselves and continued the European practice of excluding or persecuting all those who wished to worship differently. It is essential that today's citizens examine the entire picture of religious history in America, and not just the flattering view."

The founding fathers who met to write the American Constitution and Bill of Rights knew of the religious persecution in Europe from which so many had fled, and the intolerance and persecution that had been continued in America by the early settlers. However, they knew equally well of those colonial experiments that had proved that religions could coexist and remain strong.

With that knowledge, the founding fathers wrote the First Amendment, which says in part: "Congress shall make no law respecting an establishment of religion, or prohibiting the free exercise thereof." To appreciate their legislative wisdom requires a knowledge of religious history in Europe and early America. Unfortunately, few Americans possess that historical knowledge. Fearing a violation of the separation of church and state, educators have generally opted to eliminate references to religion from the public school curriculum, and as a result, Americans lack the historical knowledge necessary to understand the circumstances leading up to the enactment of the First Amendment.

Equally important is an awareness of the interpretation given those sixteen words by the courts. The responsibility of interpreting the First Amendment and applying it to complicated real situations has belonged ultimately to the United States Supreme Court. For over two hundred years, the Supreme Court justices have balanced the ideal of religious freedom with the reality of individual Americans exercising that freedom in their daily lives.

Fenwick takes great pride in the fact that among the many reviewers of Should the Children Pray? only two have perceived her bias, one certain that she favors public school prayer and the other equally certain that she does not. The author feels that there are already too many books eager to tell readers what they should think, and her intention in writing this book is to provide information from which readers can draw their own informed judgments.

She begins the final chapter of the book in this way: "If there are two things to be discovered from reading this book, they are, first, that devoutly religious people may differ on the issue of group school prayer, and second, that intelligent people have interpreted the lessons of history differently. One conclusion to be drawn from those two observations is the danger in simply accepting someone else's opinion on the issue of voluntary group prayer in public schools. Chief Justice Warren was correct in urging Americans to learn from history, but we cannot learn history's lessons if we lack the will to study America's history for ourselves."

"There are a great many people on all sides of this issue--judges, politicians, authors, professors, and ministers among them--who are eager to share their opinions in hopes you will adopt theirs for your own. To do so is to adopt their knowledge of history--or lack of knowledge--and their unknown bias, along with their opinions." Fenwick trusts her readers to make their own judgments and provides the historical information for them to do it wisely.

Lyn's "Prairie Bachelor, The Story of a Kansas Homesteader and the Populist Movement," has been selected by the State Library of Kansas as a 2021 Kansas Notable Book.  The Award is given in celebration of the best of Kansas writing.  Recipients are recognized at the annual Kansas Book Festival.

Private Choices, Public Consequences: Reproductive Technology and the New Ethics of Conception, Pregnancy, and Family
An examination of the legal, ethical, and moral dilemmas of new reproductive alternatives.
Should the Children Pray? A Historical, Judicial, and Political Examination of Public School Prayer
Readers may answer the question the title asks with the benefit of historical/legal insights.
Loading…}